skip to main | skip to sidebar

Adventures of Lulu and Phoebe in Paris

Two little Boston Terrier girls bring their Momo & Mr.Momo to Paris for a long stay. These are the tales of their very fine adventures.

a quaff swims like a trash can
Posted by Lisa Stander-Horel at 11:01 PM No comments:

We Have NEW Blogs! 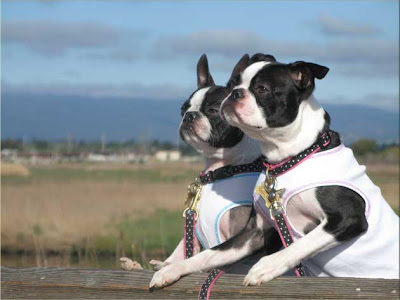 Lulu and Phoebe are moving again. Check out their new blog. And leave some comments. Those girls have enormous egos!

First is Diary of 2 Black and White Dogs. Find it here.
http://diaryof2blackandwhitedogs.blogspot.com/

Next is the new home of our Gluten Free Dogs and People. Find it here:
http://glutenfreedogsandpeople.blogspot.com/

See you there!
Posted by Lisa Stander-Horel at 8:10 PM 1 comment:

Lulu and Phoebe Want You to Visit Their Latest Blog! 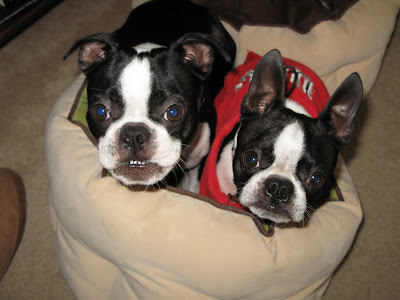 Lulu and Phoebe invite you to join them as they blog about the U.S. Presidential Election where they find the fun in politics! Of course, they hope that you will tell all your friends and non-friends too so that their big old blogger egos are fat and happy.

Don't worry. There will be more Adventures of L&P in Paris too.

So, visit them here: http://luluandphoebeelectioncoverage.blogspot.com/

Merci!
Posted by Lisa Stander-Horel at 10:01 PM No comments:

Do Lulu and Phoebe Remember Paris? 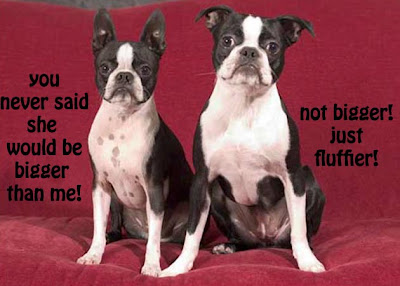 Why yes. They do. Momo talks about Paris almost every day, reminding the young L&P of their adventures.

It doesn't hurt that she and Mr. Momo make fromage blanc frequently and share with L&P. That and a true croissant would make anyone swoon with happiness, and that would include our little L&P.

In order to get a true croissant, or a pain au chocolat, one of us must zip to France and bring some back. However, the last transatlantic croissant was more like a croissant-crush. A million flaky pieces. But no matter. L&P like small flakes of anything tasty.

Treats from Paris are a highlight. It is still hard to find decent pastry and cheeses here. It is also hard to bring them back on a flight that is about 14 hours too long. Chocolate does best, and poor little macaroons do not do well at all. If the croissant was a flaky mess, the macaroons were a gooey composite of what once was perfection. That was very sad. But the part that was most disturbing? Apparently crossing so many time lines confused the heck out them, cause by the time they got here, they were barely 15 hours old, but they tasted like they were six days old, even in their ooey-gooey state. Humm, perhaps they added too many time zones to their fresh-by date??? Oh well. You can't go wrong with a big box of treats from La Maison du Chocolat!

Since little P spent her young months in Paris, she has some of the French language imprinted on her tiny little itty bitty brain. She responds much more quickly to "assis" than she does to "sit", um, or sat. She knows "avec" rather than "with" and "merde" holds a special place in her heart. Not many dogs I know poop on command to "merde".

L would prefer Paris again because she has perfected the aloof stare and the peevish facial tic. I think she would do splendidly in Paris again. She mastered the attitude perfectly.

And food still remains high on the list of things all things Paris. Jambon is still a huge favorite of both L&P, and they don't seem to mind the Amercian Jambon (can I even say that?!) but I do detect a slight indication that they seem to know it is not Parisian ham. Or even better, Spanish ham. When we bake our favorite quiche, a reminder of the best of them we tasted in Paris, two little faces will be watching us carefully looking for their taste which comes when we are done. We are pleased to say that our quiche gets a big high ten from both L&P.

The only true way to know if they remember France is to take them there. If they begin to sniff the air like crazy dogs after we exit CDG, then you know they know they feel like they are home again. Or perhaps the men in green have yet to clean the merde de chien that day.....

Next up. The Monoprix. It deserves its very own post. Nous aimons le monoprix!
Posted by Lisa Stander-Horel at 6:03 PM No comments: 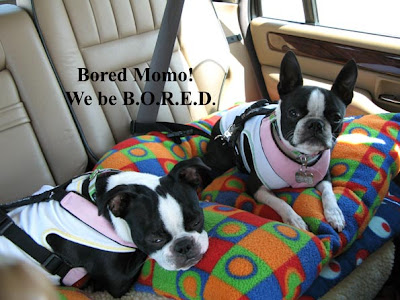 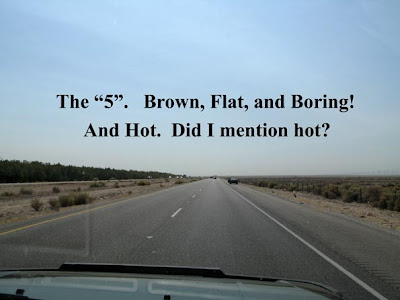 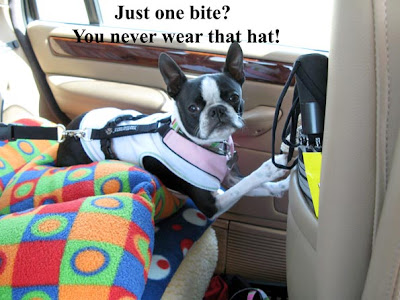 Ah, the city of lost angels. Were it only so, the trip could be much more enchanting. However, to get to Los Angeles, you need to actually get in the car and drive on the "5". Famous 5. Known for its.....boredom and brownness. Yes, seriously, brownness. Look at the photo! When the thing you look forward to on your journey is reaching the bottom of the grapevine (the twisty giant hill before you reach LA) where there is one lone Starbucks and a new (not open yet) In-Out Burger, sadly, your trip is mighty boring. You can see from the pictures that L&P had the same attitude.

Driving south on the 5 is very different than driving north. North is boring too, but at least we found a Peets Coffee which is far superior to Starbucks any day. Do you think it is fair that on the entire interstate that two decent coffee places could be placed that far apart? Perhaps it is to keep up hope so that you actually continue to drive through from one end to the other without hurling your car into the brownness never to be seen again?

There is a special special place on the 5. It is called Coalinga and if anyone reads this and is from this place, I certainly apologize in advance and wish you godspeed in getting your nostrils clean some day. It is home to Harris Ranch and the fond pack of steer that will someday be dinner. Until then, they linger right off the 5 on a long stretch where the road curves just enough to allow for trucks to slow down and block the free flow of fast moving cars. Always. So there is no quick escape past this torture. What torture you ask? Ah. Well, even if your air circulation vent is closed on your vehicle it does not matter. It will even awaken a sleeping L&P, noses arising in the air before bodies even get up to figure out why there is suddenly 534 pounds of shit in our car. It is miles and miles of cattle standing in overdone, overheated, dry aired, foul, extra-excrement and piss. You can see the waves of it poofing into the atmosphere from the heat and volume. It burns your nostrils - permeates your pores and fills your car with the stench for miles after you finally burn past this. That is if you can. There has been only one time that we have been able fly past not impeded by the big trucks. And that one lone time the air was moving in a different direction so the stench was milder. If one can call rotting poop by the ton milder.

This time we stopped after the aforementioned death-smell hole to gas up and Momo was sure it was far enough past to be rid of the smell. Apparently not. And apparently the little tiny poop flies needed to gas up too because there were thousands of them all over the gas pumps. As soon as you opened your door in flew the flies by the handful. It took a long time to coax them all out of the car. P thought that they place was pretty fine because she had her nose in the air the entire time it took her to pee.

And by the way fellow dog people. Just because you are traveling with your dog on a road trip does not mean you are exempt from picking up the poop! Especially the pile that looked like the dog was 240 pounds! Momo could not believe her eyes, and she could see the pile from the highway almost. Even P, who is known to love the poop would not go near that one. It was taller than she.

Drivers in the Los Angeles area are special special. They live in an area of the world where make believe is premier, so they make believe drive too. Some of them think that reading while driving is fine. Others prefer to chat on the multiple chat devices one can own these days, all at once. And others think that dining while driving is perfectly acceptable too, although they forget the chauffeur and stain free clothing. Momo is not talking about the snacking that we all do on occasion while motoring, but plate, napkin, utensils while driving and mind you, while wearing white. That takes a certain amount of belief in the make believe, don't you think?

Some like to drive at what they think the speed limit ought to be. That can range from faster than a speeding bullet to foot not exactly on the accelerator, but letting idle tootle you down the road. What you rarely see in Los Angeles are drivers just driving. The Momo family has seen it all. Dressing, and um, undressing. Dining. Chatting on multiple mobile devices. Reading. Mapping. Changing wigs. Everyone can probably say they have seen someone applying make-up while driving, but I bet you can't say you have seen both men and women applying products on the face, and um, elsewhere. Tanner too. It is LA after all.

L&P would care to not rate the drive as you can see from their expressions. Lulu would rather eat my hat. Momo would prefer to spend the trip with an inhaler, goggles, and perhaps some aroma therapy devices as well as nose plugs. Mr. Momo would like to either wear an ipod or turn the zippy music up to ward off smells, boredom and the "are we there " whines from the back seat. And ok, the passenger seat.

Stay tuned. We have only just arrived.
Posted by Lisa Stander-Horel at 11:33 AM No comments:

Lisa Stander-Horel
California
Gluten free baking - not taste free. Gluten free dogs and people! And a little politics with a touch of snark. 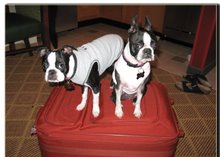